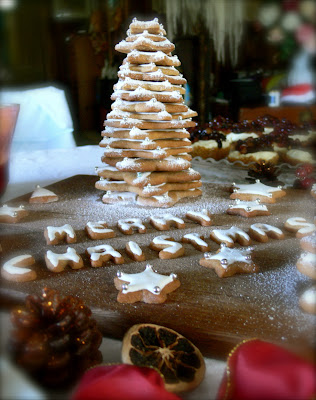 For a long time Mama has had a beautiful speculaasplank (a wooden cookie mold) that she and I used to look at and talk about using some day to make some traditional Dutch speculaas.

And the end of last year, while flipping through the Canberra Times Food and Wine I saw a picture that gave me an idea for Christmas - a ginger bread tree. It looked beautiful! Golden biscuits, silver cashous and dusting of icing sugar 'snow'.

So, while getting ready to make my 'Christmas Tree' at home at Williworld on Christmas Eve, I saw the speculaas mold and decided to make the biscuits using speculaas dough.

Mix well until well combined and rest for half to one hour.

I then rolled it out and punched out a few sets of five different star sizes.
Bake at a low heat for about 10 minutes, or until golden.

Allow to cool and decorate the tops with snow white royal icing (egg white and icing sugar) and a silver cashous on each star point.

When the icing is dry, stack the stars, slightly turning them on themselves to create a tree.

I made these biscuits again yesterday for a farewell afternoon tea for a colleague going on maternity and expecting a baby boy. However, instead of white icing, I got 'creative and narrow-mindedly sexist', and used bright blue icing! 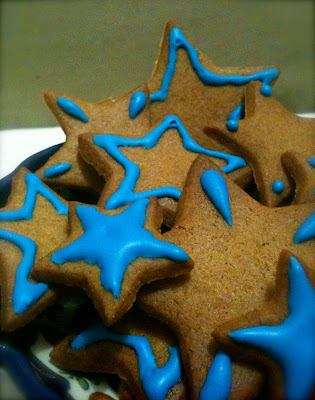 So, I've still not used the beautiful mold but I have learnt to make the dough... and thats a start.
Posted by Luke and Kristel at 9:30 PM