While relaxing with Luke, Sal and Uncle Tihamer on the lawn at Williworld this afternoon, I noticed the lemon tree, which made me think of yummy food, and then talk about it - between us we decided some lemon tarts were in order to accompany our afternoon coffee.

So, off to the kitchen went Sarah and I... 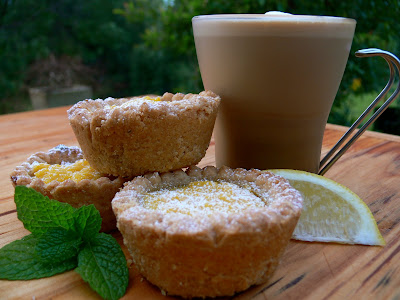 We used Stephanie Alexander's short crust pastry recipe, except used wholemeal flour and lemon juice instead of water, and made lemon custard for the filling (which we rightly presumed would curdle as we used milk instead of cream). It didn't matter though. They were still delicious and became curd tarts, instead of just lemon tarts.

In a saucepan mix 6 egg yolks with a 1/2 cup of sugar, mix well to combine.
Add a splash of vanilla, zest of 2 large lemons, a squeeze of lemon juice, a pinch of salt and 300mls of milk or cream.
Slowly cook custard on a low heat, gently stirring so it doesn't stick, for about 10 minutes or until thick.

Pour custard into blind baked shells (we used a standard 12 hole muffin tray) and bake at 180'C for around 15 minutes.


Allow to cool before gently removing from tray.

Posted by Luke and Kristel at 8:52 PM

Email ThisBlogThis!Share to TwitterShare to FacebookShare to Pinterest
Labels: dessert