I was first introduced to Macarons by Debbie, early last year, when she brought them to work for morning tea. It really was love at first bite...

I have since made them a few times (experimenting with flavours including Lime, Black Forest, Raspberry Mousse, Haselnut and Spiced Prune) and have had some wins along with some epic fails!

I created this flavour (actually two flavours) for Greg's 60th.
The first - Cardamom and Honey and the second Cardamom and Orange (based on the puddings I made the other night)
I decided on these as it would mean that I could use the one batch of cardamom shells (a time saving measure) but make two different fillings.

They turned out pretty well but I did learn (for next time) to use less colouring in the shells and a little less honey in the mascarpone (I was using Williworld honey, straight from the bee keeper, which has quite a strong flavour).

Sift and combine icing sugar and almond meal then add the cardamom.

In a clean bowl, wisk egg whites until they hold their peeks and become glossy.
Add a few drops of food colouring half way through beating egg whites.
Gently fold the almond meal and icing sugar into the egg whites until combined – be careful not to over mix.

Rap the bottom of the tray a few times then let rest for 1 – 2 hours (until a skin forms on the shells and your finger comes away clean when gently touched).

Place in pre-heated oven at 150C and bake for 10 minutes before turning oven down to 130C for another 2 - 5 minutes.
(It is around this time that you dance for joy at the little ruffled feet forming beautifully around your precious shells...)

Keep an eye on them while they are cooking so the tops don't brown - it won't change the taste; they just won't look as pretty.

Remove from oven and slide silicone or paper onto a cooling rack.

Allow to cool completely before gently pealing them off the paper.
Line shells, bottom up, in two rows of matching sizes ready for piping... 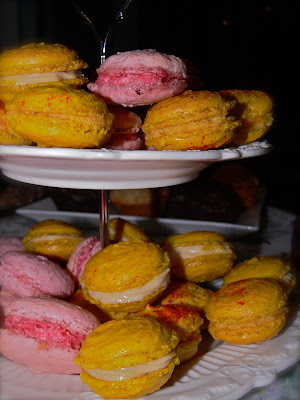 Gently boil honey for about 10 minutes
In a bowl, lightly blend mascarpone and slowly pour honey in while still beating.

Whisk yolks until creamy and pale.
In a small saucepan gently boil caster sugar and water until it reaches 121C.
While still whisking the yolks, slowly pour the sugar syrup in and continue whisking while the mixture cools, add the cubed butter and orange zest and orange jelly mixing until well combined.

Pipe the buttercream onto one row of the waiting shells then gently place the matching shell on top. 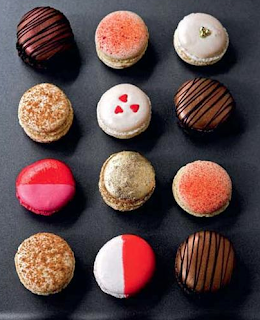 The recipe book 'Secrets of Macarons' shows many ways of decorating the shells. I'm not quite the pro decorator yet but they are good inspiration. As is the great range of edible rainbow dusts at The Raspberry Butterfly.