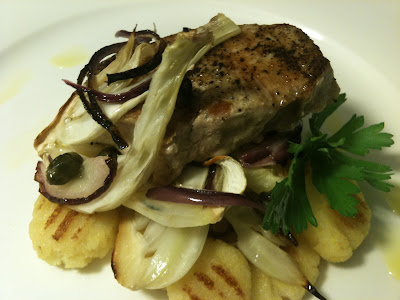 Over the years I have seen many recipes that combine fennel with fish, so when mum gave me half a bulb of fennel I thought I would give it a go.

I flicked through my books looking at various fennel recipes and settled on a delicious looking one of baked fennel with salmon and capers.

I didn't quite have all the ingredients that were required - mainly the salmon - but used the recipe as a guide and made up the rest.

In a baking dish I slowly baked a mixture of the following until tender and golden.
Fennel
Red onion
Parsley
Capers
Garlic
Olive oil
White wine

As something to go with my dish, I cooked up some semolina with a bit of water and salt. Stirring constantly, I slowly added milk as needed - making sure the mixture stayed thick enough to spoon into balls for a gnocchi type thing.
Once rolled, I pressed the balls between two forks and pan fried them until they were golden.

For the fish, I used tuna steaks as that is what I had in the fridge.
I rubbed them with a good amount of freshly cracked pepper and some salt flakes, then pan fried them until just done but golden and crispy.

The dish, and my first attempt at cooking with fennel was a success. It tasted good, though I'm not sure that fennel is for me. It has quite a strong aniseed flavour ... like licourice which is not exactly my favourite thing.

Posted by Luke and Kristel at 8:21 PM