This is not entirely 'pumpkin' soup as it has a bunch of other things in it, however you could use pumpkin on its own if you wish. 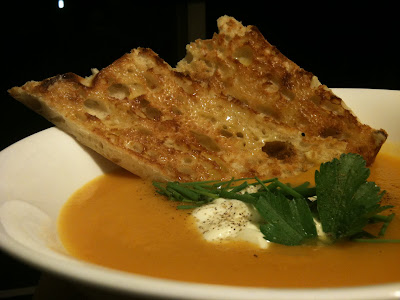 I’m not that great with quantities and they probably change a little each time, but I think I would roughly use the following...

Dice onion and fry on low heat with a little butter and oil until onion begins to caramelise.
While the onion is cooking, break garlic knob apart, leaving skin on, and dry roast in a fry pan stirring/turning for a few minutes until it begins to char. Allow to cool, remove skin and set aside
Dice potatoes and add to onions, frying on lowish heat for a few minutes.
Add diced carrot, cook for a few more minutes, stirring frequently. (The potato might stick a little but that’s ok, as long as they don't start to burn).

Stir through the stock powder and add a tiny bit of water if the veggies are sticking.
Add the diced pumpkin, stirring, frying for a minute or two
Add just enough boiling water to just cover the veggies.
Stir and simmer on medium heat for around 10-15 minutes (you don't want to over cook the pumpkin)

Remove from heat, stir through roast garlic, cover and allow to cool for a minute or two before blending with a wiz stick or in a food processor.

Serve with sour cream, turkish bread, a bit of parsley or chives and some freshly ground pepper.

Posted by Luke and Kristel at 7:31 PM