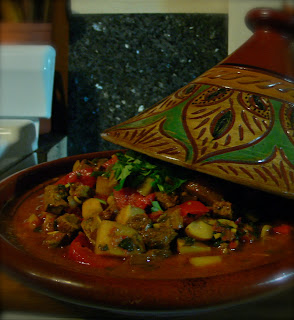 I began making Tagines after we were given a beautiful Tagine by the Kelf family as a wedding present.

Tagine is a traditional Moroccan meal named after the dish in which it is cooked. The tagine was originally used by Moroccan nomads as a portable oven, cooking pot and serving dish and was cooked on using a charcoal brazier, also made of clay.

Some modern-day tagines can be used on the stove as well as in the oven. After soaking it in water for an hour or so, I use a heat-spreader under mine and place it over a low flame, before transferring to the oven to cook.

If you don't have a tagine, a slow cooker, heavy based casserole or Dutch oven will work just as well.

Chop about 500g veal leg or shoulder into bite sized chunks, along with a brown onion, a few waxy potatoes and a red capsicum.

In a large bowl mix a finely chopped red onion, a bunch each of roughly chopped coriander and parsley, 4 or 5 cloves of garlic, a Tbsp each of cumin and paprika, 2 tsp turmeric, a chilli, pepper and salt.

Toss the veal and veggies with the spice mix.
You can then either leave to rest and marinate for a while, or just carry straight on...

When you're ready, set the tagine over a low to medium heat with a Tbsp or so of olive oil.
Place the mixture into the tagine and lightly fry for 3 - 4 minutes, stirring continuously.
Add half a cup of stock and a tin of crushed tomatoes, cover and turn the heat down or place in a low oven.

It is best if you gently cook this for several hours, checked occasionally and stirred if necessary, until the meat and potatoes are tender.!

Serve on a bed of couscous and top with fresh herbs and a little harissa.

Posted by Luke and Kristel at 8:57 PM