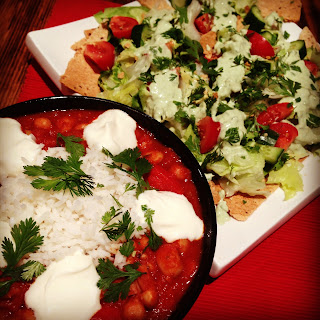 For some time I’ve been feeling totally uninspired when it comes to cooking dinner. Cold days and getting home well after-dark have resulted in a very mundane, repetitive and at times ‘weird’ menu.

With a new lease on trying to be more organised, and some deliciously inspiring night-time TV, I thought I’d give a few new dishes a go.

As such, a bit of googling brought me to this recipe. Although it is from Jamie Oliver's 15 Minute Meals series, I had no expectation of being able to prepare it that quickly. I was however pleasantly surprised that it didn’t take that much longer.

I varied the recipe a little, so here's my version.

Put the chilli, garlic, peeled and halved red onion, paprika and cumin seeds into the food processor, along with the coriander stalks (reserving the leaves) and whiz until fine.

Tip into the pan and sauté lightly. Add the deseeded and roughly chopped capsicums, drained chickpeas and beans, passata and a pinch of salt and pepper. Stir well, cover and leave to simmer.

In the meantime, cook a cup or two of rice.
I used basmati rice and my new microwave cooker: 1 cup of rice, 2 cups of boiling water; 12 minutes in the microwave then cover and rest for 4 minutes.

Make a well in the bean mixture, spoon some or all of the hot rice into the well. Dollop with yoghurt and sprinkle fresh coriander leaves on top.

Roughly slice the tortillas into strips, sprinkle on to a tray and bake until golden and crisp.

Mash, or whiz together, half a peeled avocado, a pinch of salt and pepper, the yoghurt and the juice from 2 limes, until silky.

Place the crunchy tortilla pieces into a bowl. Cut the lettuce into chunky wedges and add to the bowl.

Spoon out curls of avocado and dot over the salad. Chop the cucumber then scatter over the top along with the tomatoes. Add a sprinkling of coriander leaves - as many or little as you like.

Pour the dressing over the salad and serve.