I first had these at a friends baby shower, and I could have eaten every one of them.

It's been a few months since, but with a day to myself at home, I thought I would give them a go. After a message back from the mummy-to-be I was on my way with the recipe at hand.

I did change the recipe a little as I didn't have everything I needed, and I couldn't remember them having a batter coating as the recipe described. 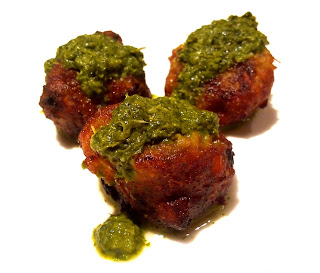 As usual, I'm not so great with quantities, but roughly used the following. 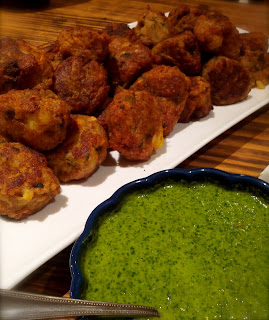 Fry the onion, then add the potatoes, coriander, chilli, garlic, ginger, turmeric and cashews.
While lightly browning in the pan, gently mash the potato a little.
Transfer mixture to a large bowl, then add the blended beans, flour, salt and pepper.
Combine well.

Having made these in advance, I placed them on a tray in a hot oven to re-heat and crisp back up.

YUM! These are totally delicious and will definitely be a regular on my menu.

Posted by Luke and Kristel at 9:16 PM